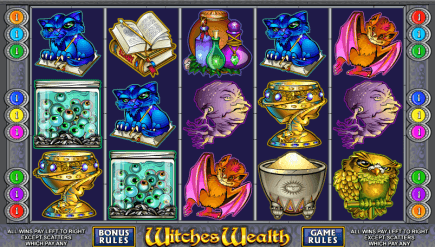 The Mr Twinkles Double Bonus feature consists of both a Flying Rescue Bonus game and a Spinning Wand Bonus game. Each game offers a variety of possible bonus prizes.

The transparent reels of Witches Wealth are pictured on a simple solid blue backdrop, and are outlined by an ornate stone arch. The reel symbols are colourful and detailed, featuring an assortment of magical potion ingredients and animals, including bats, owls and Serena’s cat Mr Twinkles. The potion ingredient symbols glow portentously, and the graphics of Witches Wealth create a fantastical atmosphere which carries through to its bonus feature.

The bat serves as the game’s scatter symbol, awarding scatter pays when 3 or more land on the reels.

Mr Twinkles, Serena’s cat, is the game’s bonus symbol, which triggers the Mr Twinkles Double Bonus game when 3 or 4 symbols land on an active payline. There are 2 separate bonus games in the feature, and players can activate either of these games depending on the number of Mr Twinkles bonus symbols they land on the reels.

Landing 3 or 4 Mr Twinkles bonus symbols on an active payline will trigger the Spinning Wand Bonus game. When this game begins, players will be presented with a different screen, and must click on the game’s ‘Start’ button to spin a magic wand. This wand will stop spinning to land on a space on which a prize is displayed, and players can either return to the base game with their winnings or advance to the following bonus feature when the wand lands on the ‘Bonus’ symbol.

Landing 5 Mr Twinkles bonus symbols on an activated payline will trigger the Flying Rescue Bonus game. This game can also be activated by the magic wand landing on a ‘Bonus’ icon during the Spinning Wand Bonus game. Players will be redirected to an animated balcony, where Serena waits on the left hand side and Mr Twinkles waits on the right. Players must help Serena fly across this balcony to rescue her cat while she dodges a variety of falling objects.

Prizes for this game may be awarded on a number of outcomes. If Serena does not complete the task, a random prize is awarded. If she reaches Mr Twinkles in the specified time, the value of this random prize will be doubled, and if she can both rescue the cat and return in time, the random prize awarded will be tripled.